This is the output of print_r() run on a typical SimpleXMLElement object:

This is a SimpleXMLElement object. The '@attributes' row is an internal representation of the attributes from the XML element. Use SimpleXML's functions to get data from this object rather than interacting with it directly.

It's not really clear to me what you're asking for in the end, however if you want to find out if a SimpleXMLElement hast a Node-Value or not, you can make use of the strlen() function in PHP.

It will take the string context of the SimpleXMLElement which is it's node-value (at least for those leaf-nodes you have in your question) and therefore will return 0 when the node is empty and larger than zero if it contains text.

Accessing a children by an attribute value is not supported by SimpleXMLElement out of the box. The Array-Access works as documented to access attributes, not children; See Example #5 Using attributes.

However you can extend SimpleXMLElement to add that functionality, for example to get a children by the Type attribute value:

This new variant can be used instead of the old one so that you can easily access what you're looking for:

This for example with the reduced example you've got in your question making <Team> the root-element outputs:

You find accessing a children by attribute value in SimpleXML outline as well in the following question:

Last time I extended SimpleXMLElement on Stackoverflow was in an answer to Displaying 5 latest thumbnails from public flickr api using atom_1 and php.

No, actually turned out that last time I extended SimpleXMLElement on Stackoverflow was explaining exactly the same access by attribute value thing in the question PHP/XML - how to read multible sub's

You have a network/DNS problem, not a PHP problem. Seems your machine cannot resolve the IP of api.flickr.com.

"su" to your web server user and try to resolve the name there, i.e.

As far as I know, you can't do it with SimpleXML because addChild doesn't make a deep copy of the element (being necessary to specify the tag name can easily be overcome by calling SimpleXMLElement::getName()).

One solution would be to use DOM instead:

See also some user comments that use recursive functions and addChild, e.g. this one.

You hash the document data twice (using different APIs for that... weird!):

This is wrong, this makes no sense.

But instead of using the CMS signature container from the result as such, you try to build an own CMS container, injecting the Esign response CMS container as if it was a mere signed hash:

According to your comments in the XML

Thus, remove the code segment above and instead put the content of the DocSignature element (don't forget to base64 decode) into the byte[] encodedSignature. Now you can inject it into the prepared signature as before:

After you fixed the issues above, two more became apparent:

You open the stream to write to like this:

File.OpenWrite is documented on docs.microsoft.com to be

equivalent to the FileStream(String, FileMode, FileAccess, FileShare) constructor overload with file mode set to OpenOrCreate, the access set to Write, and the share mode set to None.

The file mode OpenOrCreate in turn is documented to specify

that the operating system should open a file if it exists; otherwise, a new file should be created.

Thus, if there already is a file at the given location, that file remains and you start writing into it.

If the new file you create is longer than the old one, this is no problem, you eventually overwrite all the old file content and then the file grows to house the additional new content.

But if the new file you create is shorter than the old one, you have a problem: After the end of the new file there still is data from the old, longer file. Thus, your result is a hodgepodge of two files.

If you cut down your shared "signedPdf.pdf" file to its first 175982 bytes, the result looks much better!

equivalent to requesting that if the file does not exist, use CreateNew; otherwise, use Truncate.

An issue with your signing service - identity not yet valid

As mentioned above, if you cut down your shared "signedPdf.pdf" file to its first 175982 bytes, the result looks much better! Unfortunately merely better, not yet good: 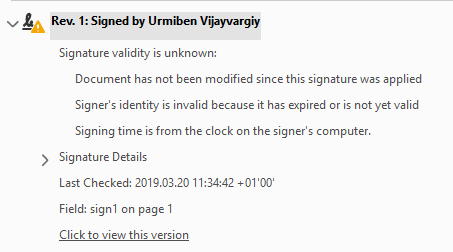 The reason for your "identity has expired or is not yet valid" becomes clearer by looking at the details: 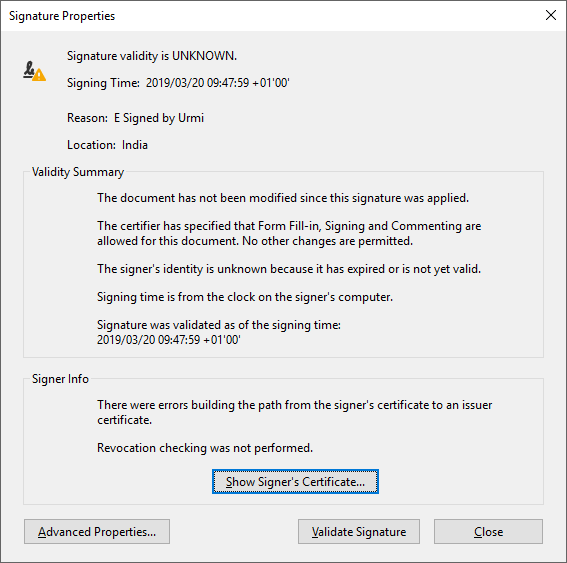 But looking at the certificate: 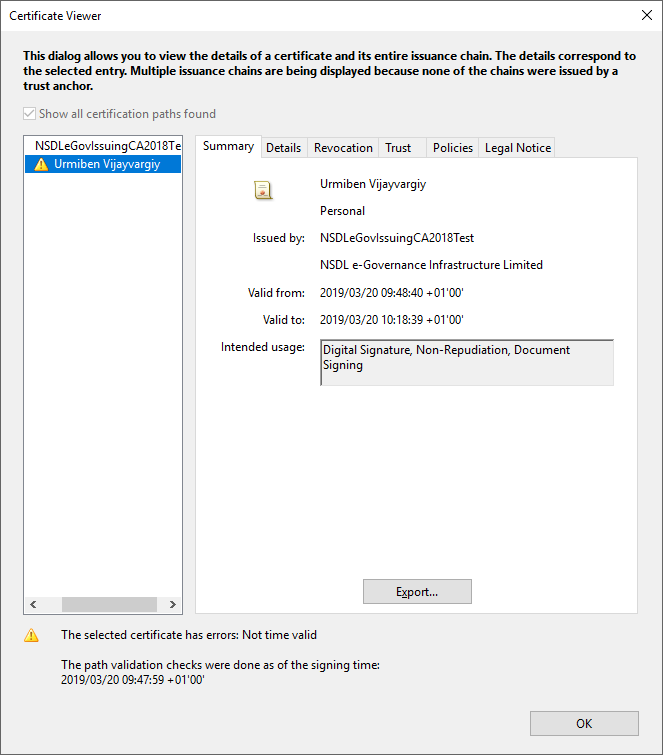 Thus, the claimed signing time is more than half a minute before your user certificate became valid! This obviously cannot be accepted by a validator...

Apparently your signing service creates a short-time certificate for you on demand, valid from just then for half an hour. And the time at which you started creating the PDF signature is not in that interval.

I doubt they will change the design of the signing service for your requirements. Thus, you'll have to cheat a bit and use a signing time slightly in the future.

By default the signing time is set to the current by the PdfSignatureAppearance constructor, i.e. when this line executes:

The date time you should use here has to be shortly (I'd propose not more than 5 minutes) after the time you will call your signing service.

This of course implies that you cannot arbitrarily wait until executing that service call. As soon as you assigned the claimed signing time above, you are committed to have successfully called your signing service shortly before that claimed time!

Furthermore, if that signing service turns out to react only slowly or only after some retries, your software should definitively check the certificate in the signature container you retrieve from it and compare its validity interval with your claimed signing time. If the claimed signing time is not in that interval, start signing again!

Now it became apparent that the AllPagesSignatureContainer you used was designed for a very special use case and still had to be adapted to your use case.

Adapting the AllPagesSignatureContainer for append mode

This at first was plausible because that class has to predict the object number that will be used for the signature value. This prediction depends on the exact use case, and switching on append mode changes this use case considerably. Thus, my advice in a comment was

If you need append mode, try to replace the

line in the AllPagesSignatureContainer by

Adapting the AllPagesSignatureContainer for append mode and object streams

iText in append mode uses the compression features of the original file, i.e. in case of your file it creates an object stream as soon as storing an indirect object that allows storage in an object stream.

To solve this for PDFs with cross reference streams, therefore, one can simply replace the PdfLiteral PRefLiteral = ... line by

i.e. by adding 1 to the originally predicted value. Unfortunately now the prediction is wrong for PDFs with cross reference tables...

A better way to fix this is to force iText to reserve an object number for the object stream for cross reference stream PDFs before predicting the signature value object number and then use the original prediction code. One way to do this is by creating and writing an indirect object right before the prediction, e.g. like this:

The answer the AllPagesSignatureContainer implementation essentially was copied from has been updated accordingly.

answered 2 Months ago
Kingpin2k
Only authorized users can answer the question. Please sign in first, or register a free account.
Not the answer you're looking for? Browse other questions tagged :
php
simplexml

Share
Related Answers
42
Signed URL for google bucket does not match signature provided
34
simplexml_load_file - redundant element with empty value is converted to new SimpleXMLElement Object
21
Signing string in ObjectiveC and Verifying in PHP - Not working
23
What is the at sign (@) in a batch file and what does it do?
23
How can I use commercial at sign in Objective-C macro?
46
Sign in with Apple Java User Verification
21
Sign multiple location with same response xml signature in PKCS7 (CMS)
15
Signal to slot connection: triggering signal iteratively inside a loop
43
Sign Pdf Using ITextSharp and XML Signature
11
SignalR - adding hubs at runtime
Top Answers Related To