Why would one omit the close tag?

I keep reading it is poor practice to use the PHP close tag ?> at the end of the file. The header problem seems irrelevant in the following context (and this is the only good argument so far):

Modern versions of PHP set the output_buffering flag in php.ini If output buffering is enabled, you can set HTTP headers and cookies after outputting HTML because the returned code is not sent to the browser immediately.

Every good practice book and wiki starts with this 'rule' but nobody offers good reasons. Is there another good reason to skip the ending PHP tag?

Sending headers earlier than the normal course may have far reaching consequences. Below are just a few of them that happened to come to my mind at the moment:

Bonus: a few gotchas (actually currently one) related to these 2 characters:

It depends if your output_buffering directive in php.ini file. If it is Off

then echo headers_sent() should output 1

In other cases, headers_sent() won't output any results because it will be FALSE. The headers won't be sent because the output is buffered.

If you want to get around this and force-send headers, you can use flush().

It’s all about loose coupling and single responsibility, which goes hand to hand with MV* (MVC/MVP/MVVM) patterns in JavaScript which are very modern in the last few years.

Loose coupling is an Object-oriented principle in which each component of the system knows its responsibility and doesn’t care about the other components (or at least tries to not care about them as much as possible). Loose coupling is a good thing because you can easily reuse the different modules. You’re not coupled with the interfaces of other modules. Using publish/subscribe you’re only coupled with the publish/subscribe interface which is not a big deal – just two methods. So if you decide to reuse a module in a different project you can just copy and paste it and it’ll probably work or at least you won’t need much effort to make it work.

When talking about loose coupling we should mention the separation of concerns. If you’re building an application using an MV* architectural pattern you always have a Model(s) and a View(s). The Model is the business part of the application. You can reuse it in different applications, so it’s not a good idea to couple it with the View of a single application, where you want to show it, because usually in the different applications you have different views. So it’s a good idea to use publish/subscribe for the Model-View communication. When your Model changes it publishes an event, the View catches it and updates itself. You don’t have any overhead from the publish/subscribe, it helps you for the decoupling. In the same manner you can keep your application logic in the Controller for example (MVVM, MVP it’s not exactly a Controller) and keep the View as simple as possible. When your View changes (or the user clicks on something, for example) it just publishes a new event, the Controller catches it and decides what to do. If you are familiar with the MVC pattern or with MVVM in Microsoft technologies (WPF/Silverlight) you can think of the publish/subscribe like the Observer pattern. This approach is used in frameworks like Backbone.js, Knockout.js (MVVM).

Here is an example:

Another example. If you don’t like the MV* approach you can use something a little different (there’s an intersection between the one I’ll describe next and the last mentioned). Just structure your application in different modules. For example look at Twitter. 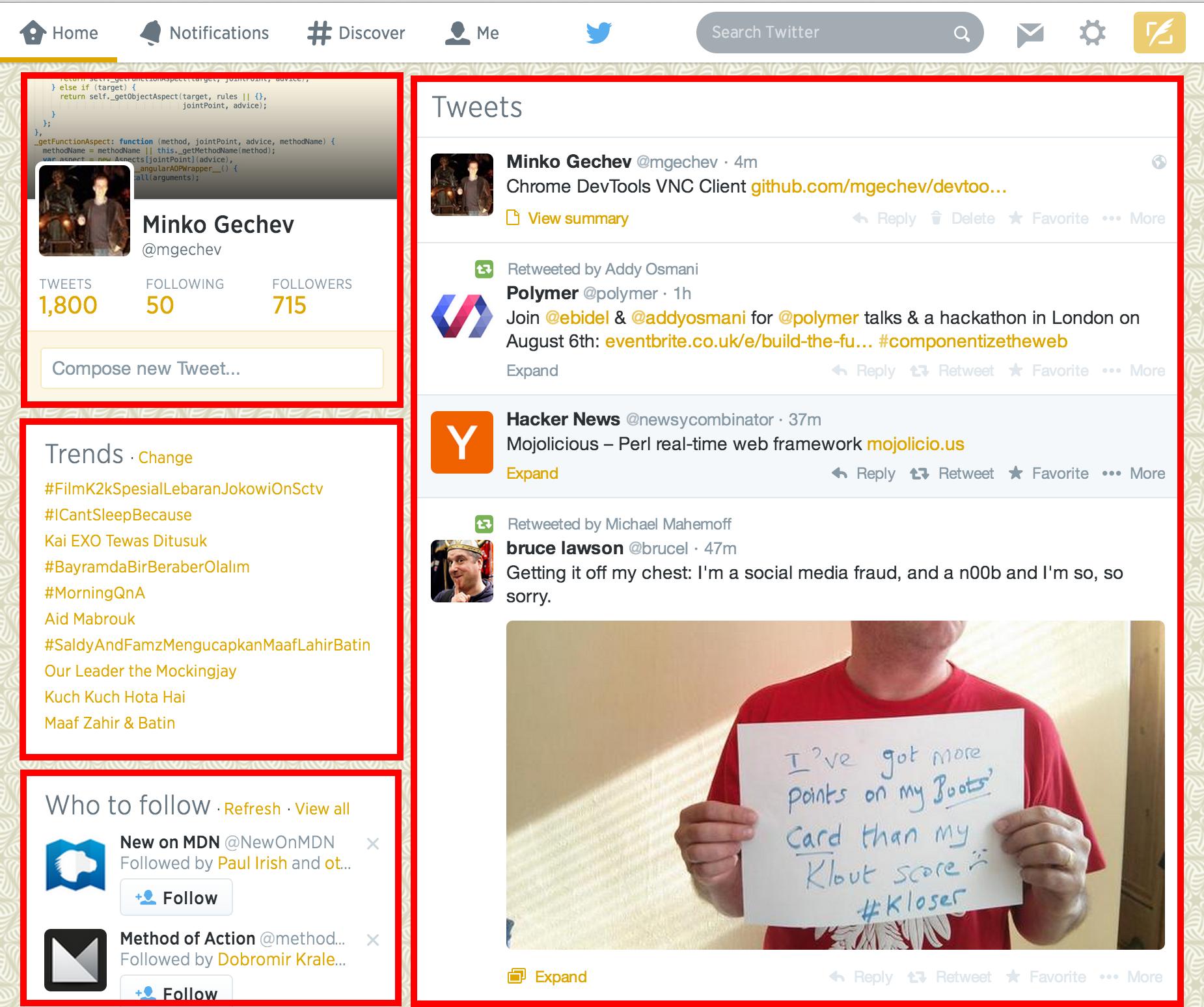 If you look at the interface you simply have different boxes. You can think of each box as a different module. For example you can post a tweet. This action requires the update of a few modules. Firstly it has to update your profile data (upper left box) but it also has to update your timeline. Of course, you can keep references to both modules and update them separately using their public interface but it’s easier (and better) to just publish an event. This will make the modification of your application easier because of looser coupling. If you develop new module which depends on new tweets you can just subscribe to the “publish-tweet” event and handle it. This approach is very useful and can make your application very decoupled. You can reuse your modules very easily.

Here is a basic example of the last approach (this is not original twitter code it’s just a sample by me):

For this approach there's an excellent talk by Nicholas Zakas. For the MV* approach the best articles and books I know of are published by Addy Osmani.

Drawbacks: You have to be careful about the excessive use of publish/subscribe. If you’ve got hundreds of events it can become very confusing to manage all of them. You may also have collisions if you’re not using namespacing (or not using it in the right way). An advanced implementation of Mediator which looks much like an publish/subscribe can be found here https://github.com/ajacksified/Mediator.js. It has namespacing and features like event “bubbling” which, of course, can be interrupted. Another drawback of publish/subscribe is the hard unit testing, it may become difficult to isolate the different functions in the modules and test them independently.

Read the answers in the duplicate questions for the meaning and usage of &:.... In this case, entries is an array, and there are three methods map, sort_by, and map chained. sort_by(&:last) is equivalent to sort_by{|x| x.last}. map(&:first) is the same as map{|x| x.first}. The reason the first map does not use &:... is because (i) the receiver of accept_entry is not e, and (ii) it takes an argument e.

The final thing that worked was:

Now the browser does not make requests for the image when loading a page with embeded one.

answered 3 Months ago
Ali Tor
Only authorized users can answer the question. Please sign in first, or register a free account.
Not the answer you're looking for? Browse other questions tagged :
php
security
http-headers

Share
Related Answers
30
Why is the <center> tag deprecated in HTML?
30
Why would one mark local variables and method parameters as “final” in Java? [closed]
40
Why would one use REST instead of SOAP based services? [closed]
31
Why would one use the Publish/Subscribe pattern (in JS/jQuery)?
28
Why would one use the unary operator on a property in ruby? i.e &:first [duplicate]
31
Why does one of these font-face render in IE8, but the others don't?
18
How does a 7- or 35-pass erase work? Why would one use these methods?
20
Why can we omit the first dimension of a multidimensional array when we are passing it to a function
22
Why would one use the ChannelFactory to instantiate a WCF proxy rather than a Service Reference?
22
Why can I omit the subsequent null-conditional operators in an invocation chain?
Top Answers Related To

46
PHP - get_headers() return wrong result when non-UTF symbols are in URL
36
How to avoid HTTP Header Injection (new lines characters)
35
PHP - Passing data from a site to another site securely
29
PHP headers already sent while redirecting page [duplicate]
36
php, curl, headers and content-type
35
headers_sent() return false, but headers were sent
35
PHP headers inside of a javascript condition?
49
Can I serve MP3 files with PHP?
31
Headers for PNG image output to make sure it gets cached at browser?
27
PHP session_start() overwrites HTTP Expires header