I am curious as to how programs such as gitolite work -- specifically how do they interact with the SSH protocol to provide a tailored experience. Can somebody provide an example of how I might accomplish something like the following and where I might learn more about this topic?

A side question: my primary language is JavaScript. Is it possible to accomplish what I want with NodeJS?

gitolite in itself is an authorization layer which doesn't need ssh.
It only needs to know who is calling it, in order to authorize or not that person to do git commands.

The way gitolite is called by ssh is explained in "Gitolite and ssh", and uses the ssh mechanism forced command:

The ~/.ssh/authorized_keys (on the gitolite ssh server) looks like:

First, it finds out which of the public keys in this file match the incoming login. Once the match has been found, it will run the command given on that line; e.g., if I logged in, it would run [path]/gitolite-shell sitaram.
So the first thing to note is that such users do not get "shell access", which is good!

(forced command = no interactive shell session: it will only provide a restricted shell, executing only one script, always the same)

Before running the command, however, sshd sets up an environment variable called SSH_ORIGINAL_COMMAND which contains the actual git command that your workstation sent out.
This is the command that would have run if you did not have the command= part in the authorized keys file.

When gitolite-shell gets control, it looks at the first argument ("sitaram", "usertwo", etc) to determine who you are. It then looks at the SSH_ORIGINAL_COMMAND variable to find out which repository you want to access, and whether you're reading or writing.

Now that it has a user, repository, and access requested (read/write), gitolite looks at its config file, and either allows or rejects the request.

The fact that the authorized_keys calls a perl script (gitolite-shell) is because Gitolite is written in perl.
It could very well call a javascript program.

If your ssh on GitHub without any command, you get a greeting message, like your mention in your question.
Gitolite displays a similar message, as detailed in the print_version() function of the info command script:

The late 2013 Gitolite documentation now includes that diagram which summarizes all the pieces: 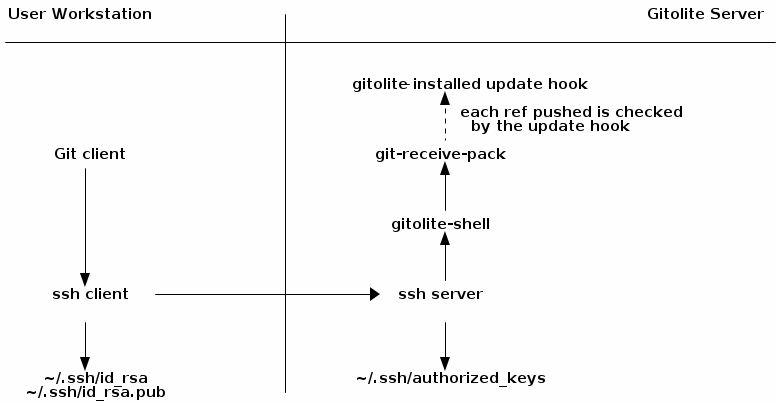 Like all such performance optimisations you should only do it after extensive profiling to ensure the code really is in a bottleneck, and probably given the micro nature, that it is being run in a tight loop. Generally the Linux developers are pretty experienced so I would imagine they would have done that. They don't really care too much about portability as they only target gcc, and they have a very close idea of the assembly they want it to generate.

Your config defines an alias /git/ which will call your gitolite wrapper.
That means it will call it only for addresses like yourServer/git/...

You should at least try your clone with:

As the OP hoistyler references in this answer, the only remaining issue was an authentication one based on a file-based login.

Your config file should contain, to be sure, the full path of your private/public key:

Beside that, make sure $HOME is the same in both cases, and that you are running those commands with the same user id, to rule out any right access.

Most interesting is when I'm changing my .git/config's url variable from git:poky to gitolite@git.myserver.com:poky then everything works fine.

That means your public/private key (named ~/.ssh/gitolite(.pub)) is duplicated as ~/.ssh/id_rsa(.pub), which is the default name for those keys, as searched by ssh.

I believe this problem is non technology specific.
Since your processing jobs are long running, I suggest these jobs should report their progress during execution. In this way a job which has not reported progress for a substantial substantial duration becomes a clear candidate for cleanup and then can be restarted on another worker role.
How you record progress and do job swapping is upto you. One approach is to use database as recording mechanism and creating an agent worker process that pings the job progress table. In case the worker process determines any problems it can take corrective actions.

Other approach would be to associate the worker role identification with the long running process. The worker roles can communicate their health status using some sort of heart beat.
Had the jobs not been long running you could have flagged the start time of job instead on status flag and could have used the timeout mechanism to determine whether the processing has failed.

answered 4 Months ago
dzm
Only authorized users can answer the question. Please sign in first, or register a free account.
Not the answer you're looking for? Browse other questions tagged :
ssh
gitolite

Share
Related Answers
56
How do the likely/unlikely macros in the Linux kernel work and what is their benefit?
47
How do I set the working directory of the parent process?
38
How do annotations like @Override work internally in Java?
19
How do facial recognition programs work? [closed]
21
How do programs communicate with each other?
146
How to make sure that WorkManager cancels my Worker?
25
How do I detect unexpected worker role failures and reprocess data in those cases?
23
How can I Host the WorkflowDesigner of WorkflowFoundation 4 in a Winforms application?
27
In sharepoint designer's workflow editor how do I get the workflow initiators username?
13
"LIKE" operator works in MS Access, but not ADO
Top Answers Related To

22
gitolite: allow to change only selelected files
43
gitolite disallow access for directory on master branch but not on user branch
74
Gitolite restrict access to branch
31
Gitolite server-side setup for both http and ssh
25
gitolite setup getting FATAL: fingerprinting failed for '/tmp/Q3pnE4WVbu'
19
ssh config is working from home, but not working from another directory
47
Gitolite prompts for password only on central server with SSH registered
43
gitolite: PTY allocation request failed on channel 0
25
Adding users to Gitolite
62
gitolite hook for specific repository