How to programmatically close a JFrame

What's the correct way to get a JFrame to close, the same as if the user had hit the X close button, or pressed Alt+F4 (on Windows)?

I have my default close operation set the way I want, via:

It does exactly what I want with the aforementioned controls. This question isn't about that.

What I really want to do is cause the GUI to behave in the same way as a press of X close button would cause it to behave.

Suppose I were to extend WindowAdaptor and then add an instance of my adaptor as a listener via addWindowListener(). I would like to see the same sequence of calls through windowDeactivated(), windowClosing(), and windowClosed() as would occur with the X close button. Not so much tearing up the window as telling it to tear itself up, so to speak.

If you want the GUI to behave as if you clicked the X close button then you need to dispatch a window closing event to the Window. The ExitAction from Closing An Application allows you to add this functionality to a menu item or any component that uses Actions easily.

Consider using CardLayout instead of hunting for how many JFrames there are. Then..

There are lots of examples in this forum - e.g. as shown here. 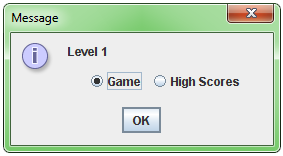 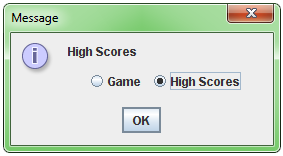 There is a simple fix that works almost all the time: make your frame not resizable after having set visible. So only modifies your code this way:

This way, the frame will start maximized and the maximize button will be greyed out, preventing user to use it. (I don't really know why you have to do this. I suppose the maximized state is really applied only when the window becomes visible, and if you make it unresizable before, it will not apply.)

It works almost all the time because on Windows 7 at least you can make the window goes out of the maximized state by clicking the title bar and dragging it. But it will be at the size you have set it earlier. Problem is that your user will not be able to maximize it again, and I haven't found the way with listeners to make the window back to maximized state. ( Edit: @David Kroukamp shows in the last part of his answer that it is possible to force the maximized state by using a ComponentListener. Therefore you don't have to use setResizable(false) This way you still have a problem with Windows 7 because the dragging action is not catched by this event for whatever reason but users will be able to use the maximized button to put it back where it should be.)

Now, there is almost never a reason to do this kind of things. Users don't really like when you prevent them to manipulate their windows (maximized windows can not be moved, for example, and that can be annoying when you have multiple screens). An exception is if you are making a game, which is typically full-screen. But then you wouldn't want a JFrame because you don't want all the decoration, but a Window.

If your problem is that the default window size is very small, it's normal. You have to put something in your frame first (some controls, buttons, what you want in your application), using layouts (that's important) then call the method pack() on your frame. It will chose a nice default size for your window.

Finally, a last word. I've put my example code in a main method as a shortcut, but you should always do Swing stuff in the Swing EDT by using SwingUtils.invokeLater().

There are many things wrong with your code.

It starts with wrong comparison of strings ( see here ).

But your actual problem: you are sleeping the event dispatcher thread ( see there )

So your idea of sleeping with an event listener is simply the wrong approach. You can't do it this way. You have to re-think your approach there.

And the real answer here is: you are lacking basic knowledge of Java. Consider learning such basic things first before further overburdening yourself if Swing UI coding.

Your requirement seems to be: after that button was hit - and a certain amount of time passed you want to print something on the console. You can do that like:

I didn't run this through the compiler - it is meant as "pseudo code" to give you some ideas how to solve your problem.

But further thinking about this - I think this is going in the wrong direction. You don't want that anything is waiting when you develop a reasonable UI application.

In other words: you think of:

Wrong approach. Instead work along these lines:

Example: changing radiobuttons causes events to be fired. You should not have a loop that regularly keeps checking those buttons. Instead you define a clear flow of actions/events the user has to follow in order to trigger a certain action.

answered 4 Weeks ago
Classified
Only authorized users can answer the question. Please sign in first, or register a free account.
Not the answer you're looking for? Browse other questions tagged :
java
swing
jframe

Share
Related Answers
27
How to set Icon to JFrame
52
How to make a transparent JFrame but keep everything else the same?
23
How to use KeyListener with JFrame?
40
How to add components to JFrame once it's visible without having to resize it?
70
How to wait for a JFrame to close before continuing?
37
How to programmatically search a PDF document in c# [closed]
22
How to use setVisible in JFrames?
33
How to make a modal JFrame? [duplicate]
25
How to programmatically close vscode.window's showInformationMessage box
7
How to properly hide a JFrame
Top Answers Related To