How to crop an image using C#?

How can I write an application that will crop images in C#?

You can use Graphics.DrawImage to draw a cropped image onto the graphics object from a bitmap.

simply call this function ..with param source ,destination and size what u want :)

There are more approaches for image to ASCII art conversion which are mostly based on using mono-spaced fonts. For simplicity, I stick only to basics:

This approach handles each pixel of an area of pixels as a single dot. The idea is to compute the average gray scale intensity of this dot and then replace it with character with close enough intensity to the computed one. For that we need some list of usable characters, each with a precomputed intensity. Let's call it a character map. To choose more quickly which character is the best for which intensity, there are two ways:

Intensity-based conversion is great also for gray-scale images (not just black and white). If you select the dot as a single pixel, the result gets large (one pixel -> single character), so for larger images an area (multiply of font size) is selected instead to preserve the aspect ratio and do not enlarge too much.

sorted descending and pretend to be linearly distributed.

Here is an ancient example of mine in C++ and VCL:

You need to replace/ignore VCL stuff unless you use the Borland/Embarcadero environment.

This is the result: Slightly NSFW intensity example image

On the left is ASCII art output (font size 5 pixels), and on the right input image zoomed a few times. As you can see, the output is larger pixel -> character. If you use larger areas instead of pixels then the zoom is smaller, but of course the output is less visually pleasing. This approach is very easy and fast to code/process.

Then you can process more complex images with better results:

Here is the result in a 1:1 ratio (zoom to see the characters):

Of course, for area sampling you lose the small details. This is an image of the same size as the first example sampled with areas:

As you can see, this is more suited for bigger images.

This approach tries to replace area (no more single pixel dots) with character with similar intensity and shape. This leads to better results, even with bigger fonts used in comparison with the previous approach. On the other hand, this approach is a bit slower of course. There are more ways to do this, but the main idea is to compute the difference (distance) between image area (dot) and rendered character. You can start with naive sum of the absolute difference between pixels, but that will lead to not very good results because even a one-pixel shift will make the distance big. Instead you can use correlation or different metrics. The overall algorithm is the almost the same as the previous approach:

How can we compute the distance between a character and a dot? That is the hardest part of this approach. While experimenting, I develop this compromise between speed, quality, and simpleness:

This is the result for font size = 7 pixels 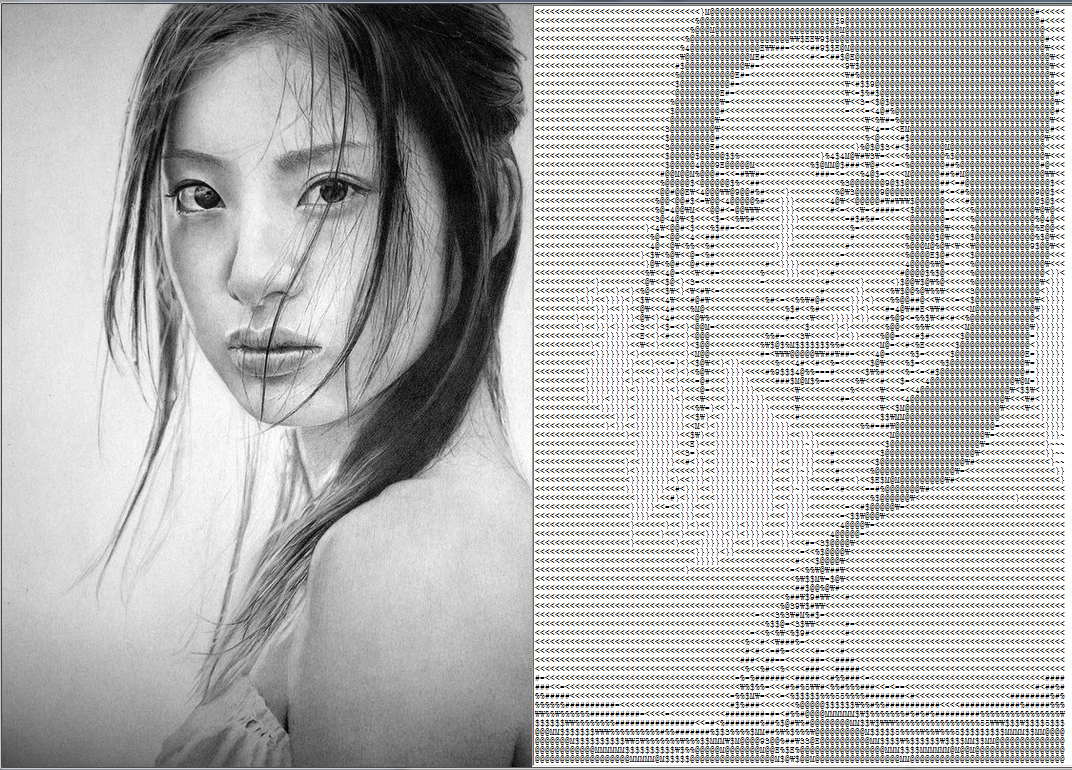 As you can see, the output is visually pleasing, even with a bigger font size used (the previous approach example was with a 5 pixel font size). The output is roughly the same size as the input image (no zoom). The better results are achieved because the characters are closer to the original image, not only by intensity, but also by overall shape, and therefore you can use larger fonts and still preserve details (up to a point of course).

Here is the complete code for the VCL-based conversion application:

It is simple a form application (Form1) with a single TMemo mm_txt in it. It loads an image, "pic.bmp", and then according to the resolution, choose which approach to use to convert to text which is saved to "pic.txt" and sent to memo to visualize.

For those without VCL, ignore the VCL stuff and replace AnsiString with any string type you have, and also the Graphics::TBitmap with any bitmap or image class you have at disposal with pixel access capability.

A very important note is that this uses the settings of mm_txt->Font, so make sure you set:

to make this work properly, otherwise the font will not be handled as mono-spaced. The mouse wheel just changes the font size up/down to see results on different font sizes.

Finally here is a comparison between the two approaches on the same input:

The green dot marked images are done with approach #2 and the red ones with #1, all on a six-pixel font size. As you can see on the light bulb image, the shape-sensitive approach is much better (even if the #1 is done on a 2x zoomed source image).

While reading today's new questions, I got an idea of a cool application that grabs a selected region of the desktop and continuously feed it to the ASCIIart convertor and view the result. After an hour of coding, it's done and I am so satisfied with the result that I simply must have to add it here.

OK the application consists of just two windows. The first master window is basically my old convertor window without the image selection and preview (all the stuff above is in it). It has just the ASCII preview and conversion settings. The second window is an empty form with transparent inside for the grabbing area selection (no functionality whatsoever).

Now on a timer, I just grab the selected area by the selection form, pass it to conversion, and preview the ASCIIart.

So you enclose an area you want to convert by the selection window and view the result in master window. It can be a game, viewer, etc. It looks like this:

So now I can watch even videos in ASCIIart for fun. Some are really nice :).

If you want to try to implement this in GLSL, take a look at this:

There is a difference in how you call InverseFFT between the working FFT->IFFT application, and the broken Convolution application. In the latter case you do not pass explicitly the Width and Height parameters (which you are supposed to get from the input image):

As a result both Width and Height are 0 and the code skips over most of the inverse 2D transformation. Initializing those parameters should give you something which is at least not all black. 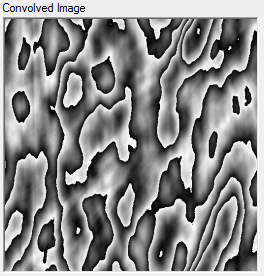 Then you should notice some sharp white/black edges. Those are caused by wraparounds in the output values. To avoid this, you may want to rescale the output after the inverse transform to fit the available scale with something such as:

This should then give the more reasonable output: 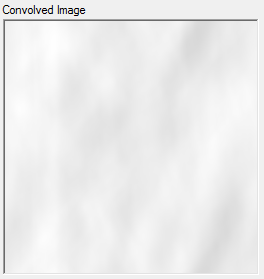 However that is still not as depicted in your book. At this point we have a 2D circular convolution. To get a 2D linear convolution, you need to make sure the images are both padded to the sum of the dimensions:

And as you adjust the padding, you may want to change the padding color to black otherwise your padding will in itself introduce a large correlation between the two images:

Now you should be getting the following: 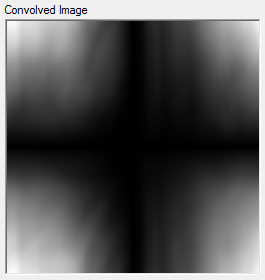 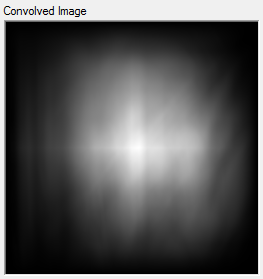 answered 4 Months ago
Jasarien
Only authorized users can answer the question. Please sign in first, or register a free account.
Not the answer you're looking for? Browse other questions tagged :
c#
image-processing