What's the difference between git reset --mixed, --soft, and --hard?

I'm looking to split a commit up and not sure which reset option to use.

I was looking at the page In plain English, what does "git reset" do?, but I realized I don't really understand what the git index or staging area is and thus the explanations didn't help.

Also, the use cases for --mixed and --soft look the same to me in that answer (when you want to fix and recommit). Can someone break it down even more? I realize --mixed is probably the option to go with, but I want to know why. Lastly, what about --hard?

Can someone give me a workflow example of how selecting the 3 options would happen?

When you modify a file in your repository, the change is initially unstaged. In order to commit it, you must stage it—that is, add it to the index—using git add. When you make a commit, the changes that are committed are those that have been added to the index.

git reset changes, at minimum, where the current branch (HEAD) is pointing. The difference between --mixed and --soft is whether or not your index is also modified. So, if we're on branch master with this series of commits:

HEADpoints to C and the index matches C.

When we run git reset --soft B, master (and thus HEAD) now points to B, but the index still has the changes from C; git status will show them as staged. So if we run git commit at this point, we'll get a new commit with the same changes as C.

Okay, so starting from here again:

Now let's do git reset --mixed B. (Note: --mixed is the default option). Once again, master and HEAD point to B, but this time the index is also modified to match B. If we run git commit at this point, nothing will happen since the index matches HEAD. We still have the changes in the working directory, but since they're not in the index, git status shows them as unstaged. To commit them, you would git add and then commit as usual.

And finally, --hard is the same as --mixed (it changes your HEAD and index), except that --hard also modifies your working directory. If we're at C and run git reset --hard B, then the changes added in C, as well as any uncommitted changes you have, will be removed, and the files in your working copy will match commit B. Since you can permanently lose changes this way, you should always run git status before doing a hard reset to make sure your working directory is clean or that you're okay with losing your uncommitted changes.

And finally, a visualization: 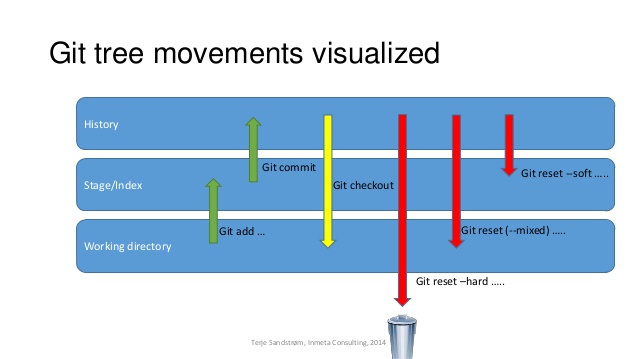 By comparison, since svn has no index, only a working tree, svn checkout will copy a given revision on a separate directory.
The closer equivalent for git checkout would:

All those three working tree modifications (svn checkout, update, switch) have only one command in git: git checkout.
But since git has also the notion of index (that "staging area" between the repo and the working tree), you also have git reset.

Thinkeye mentions in the comments the article "Reset Demystified ".

For instance, if we have two branches, 'master' and 'develop' pointing at different commits, and we're currently on 'develop' (so HEAD points to it) and we run git reset master, 'develop' itself will now point to the same commit that 'master' does.

On the other hand, if we instead run git checkout master, 'develop' will not move, HEAD itself will. HEAD will now point to 'master'.

So, in both cases we're moving HEAD to point to commit A, but how we do so is very different. reset will move the branch HEAD points to, checkout moves HEAD itself to point to another branch. 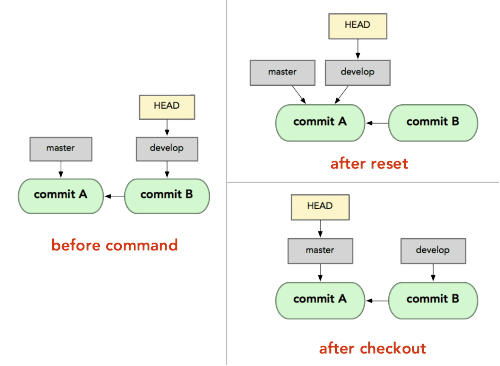 On those points, though:

LarsH adds in the comments:

De Novo concurs in the comments:

@LarsH is correct.
The second bullet has a misconception about what HEAD is in will update the HEAD only if you checkout a branch.
HEAD goes wherever you are, like a shadow.
Checking out some non-branch ref (e.g., a tag), or a commit directly, will move HEAD. Detached head doesn't mean you've detached from the HEAD, it means the head is detached from a branch ref, which you can see from, e.g., git log --pretty=format:"%d" -1.

Since the node_modules directory is already tracked as part of the repository, the .gitignore rule will not apply to it.

You need to untrack the directory from git using

You can run the above 2 in git-bash.

After this, the .gitignore rule will ignore the directory away.

Note that this will remove the directory node_modules from your other repos once you pull the changes in. Only the original repo where you made that commit will still have the node_modules folder there.

From your master branch since you are done v1.0 add a tag called v1.0.

Another common practice is to use branches to work on features until they are stable.

That creates a new branch named whatever is in [feature-branch] and checks it out. Be sure to do this from where you want to start working on the feature (typically from master).

Once stable they can then be safely merged into master. From master run:

This way your master branch always stays in a working state and only completed items get added once ready. This will allow you to keep a working copy of the app at all times (ideally anyways) for testing, etc.

You could use branches for each version of the application however using tags makes it so you can't merge into another branch version by accident.

answered 3 Months ago
davka
Only authorized users can answer the question. Please sign in first, or register a free account.
Not the answer you're looking for? Browse other questions tagged :
git
version-control

136
Gitlab repository mirroring
121
Git branch name - case sensitive or insensitive?
282
Git push: “fatal 'origin' does not appear to be a git repository - fatal Could not read from remote repository.”
43
Git Init in home directory - now unable to commit changes
73
Git: How to remove file from index without deleting files from any repository
40
Github restricting access
314
Git: fatal: Pathspec is in submodule
48
Git for windows version 2.5.3 not able to push changes
50
.gitignore is not ignoring directories
45
Git: Removing carriage returns from source-controlled files