When I want to edit C# Unity scripts, they open in Visual Studio. It is supposed to provide auto complete for all Unity related code, but it doesn't work.

Here you can see the missing functionality:

As seen, the transform object does not open the autocomplete menu.

There is no auto-completion because the script says "Miscellaneous Files" instead of the of the name of the Project. Take a look at the image below that came from the video in your question:

The "Miscellaneous Files" message can happen for many reasons:

Most of the times, restarting Unity and Visual Studio should fix this.

I can't tell which one is causing the problem but I will cover the most likely solution to fix this.

If newly created C# files are coming up as Miscellaneous then follow the instruction below:

Credit goes to chrisvarnz for this particular solution which seems to have worked for multiple people.

If not working, check if you are having this error:

The "GetReferenceNearestTargetFrameworkTask" task was not found

See this answer for more information.

It sounds like you're wanting snippets. You can add them yourself, or you can install an extension from the marketplace that will come with a number of popular snippets baked in.

You may be interested in changing the settings below as well, controlling how tab works and whether or not snippets appear first in the suggestions.

Open settings with ?, on mac, or Ctrl+ on Windows. Then search for the setting and click the edit icon next to the result. 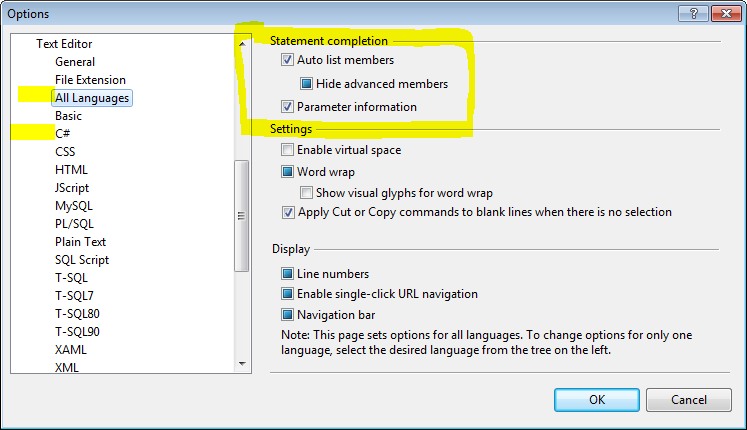 In prose, in case you can't see the above image:

Open Tools > Options > Text Editor. If you're only having this issue with one language, find that language; if it's for everything, click "All Languages". Right at the top, there'll be a few options labeled "Auto list members", "Hide advanced members", and "Parameter information". Make sure all of those are enabled (though the second may be disabled; if so, ignore it).

Finally had to create a brand new solution and add the projects from the older solution to the newly created one. Not sure what the problem was, but this helped.

I believe what you are looking for is the Import Symbol Creation with Re#. I use this all the time when accessing members that are not part of the current using statements. In essence, Re# will look through all your referenced assemblies and see if anything matches and then provide a list of those possible matches and import if needed.

The default Re# key mapping is Ctrl+Alt+space.

I'm not sure if I updated my mappings, but I have to use: Shift+Alt+space

answered 1 Month ago
hnkk
Only authorized users can answer the question. Please sign in first, or register a free account.
Not the answer you're looking for? Browse other questions tagged :
c#
visual-studio
unity3d
intellisense