The RecyclerView widget is a more advanced and flexible version of ListView.

Okay, it sounds cool, but when I saw this example picture, I got really confused about the difference between these two. 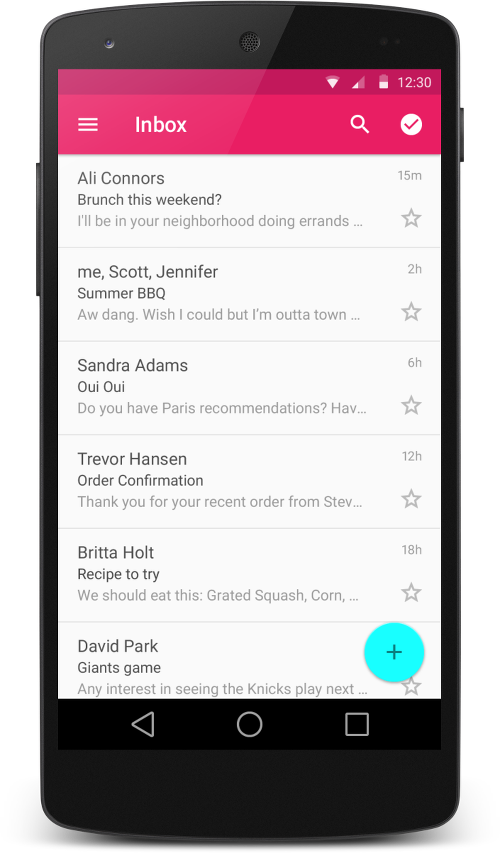 The picture above can be easily created by ListView using custom adapter.

So, in what situation should one use RecyclerView?

RecyclerView was created as a ListView improvement, so yes, you can create an attached list with ListView control, but using RecyclerView is easier as it:

There is more about RecyclerView, but I think these points are the main ones.

So, to conclude, RecyclerView is a more flexible control for handling "list data" that follows patterns of delegation of concerns and leaves for itself only one task - recycling items.

I've figured it out. I couldn't understand how the hell the adapter started and how did it know where to get the data from. When i extended the BaseAdapter class, in the constructor of that class I initialized the list of items that I wanted to see in the ListView. But I couldn't figure out how these values would be used and when.

In the BaseAdapter there are some methods that need to be overridden. Among these, there is getCount().

When the ListView is created and whatnot, it calls getCount(). If this returns a value different than 0 (I returned the size of the ArrayList which I've previously initialized in the constructor), then it calls getView() enough times to fill the screen with items. For instance, I initialized the ArrayList with 20 items. Because only 8 items initially fit on the screen, getView() was called 8 times, each time asking for the position it required for me to return (more precisely it wanted to know how the row would look like in the list on that specific position, what data it needed to contain). If I scroll down the list, getView() gets called over and over again, 'til I hit the end of the list, in my case 20 items / rows.

What notifyDataSetChanged() does is ... when called, it looks at what items are displayed on the screen at the moment of its call (more precisely which row indexes ) and calls getView() with those positions.

i.e. if you're displaying the first 8 items in the list (so those are the ones visible on the screen) and you add another item between the 2nd and 3rd item in the list and you call notifyDataSetChanged() then getView() is called 8 times, with positions starting from 0 and ending with 7, and because in the getView() method you're getting data from the ArrayList then it will automatically return the new item inserted in the list alongside 7 out of the previous 8 (7 and not 8 because the last item went one position down, so it is not visible anymore), and the ListView will redraw, or whatever, with these items.

Also, important to specify is that if you've implemented getView() correctly, you'll end up recycling the items (the objects) already displayed (instead of creating new ones). See this video at around 12:00 minutes to see the correct way to implement getView()

I've figured all this out by placing calls to LogCat in every method and following what was going on.

Hope this helps someone who's just now starting to understand how ListViews work.

P.S. This example also helped me a lot to understand.

Nowadays ListViews are not really used anymore. Android came out with the RecyclerView which does the recycling of the views for you, but knowing the basics of a ListView helps with understanding the RecyclerView.

Here's a link for reference: https://developer.android.com/guide/topics/ui/layout/recyclerview

You will have to create additional fragment layout, containing RecyclerView.

Therefore for your fragment you may get the following xml:

And create additional Fragment class, which will inflate that layout and implement methods, that you will need to update refresh indicator status.

If you wish to connect your ViewPager with new support library TabLayout, it is easily one with:

Finally, if you will update your "fragmented" ViewPager, don't try to reset the adapter, as fragments are managed not with adapter, but with FragmentManager. It is wiser to update content of corresponding RecyclerViews

you can use requiresFadingEdge attribute in your xml. make a listview inside your layout with this attributes:

so as your items loaded inside the listview it will have faded bounds on its top and bottom like this image below:

This happens because the views get recycled and reused.

So when the view gets recycled, it retains properties of the "old" view if you don't change them again. So when you scroll down to number 12, the view that used to hold number 1 gets recycled (as it can't be seen on the screen anymore), and is used to create number 12. This is why the blue color is on number 12.

When the item is, for example, clicked, you'll need to save a "clicked" value into your POJO object. Then when the item is drawn, check that value and set the correct image / background color depending on that value.

I've done this in the below code, so it should give you a rough idea of what to do:

And i've added a "clicked" boolean to the MyPojo class.

answered 3 Months ago
JoJo
Only authorized users can answer the question. Please sign in first, or register a free account.
Not the answer you're looking for? Browse other questions tagged :
android
listview
android-recyclerview