Support for “border-radius” in IE

Does anyone know if/when Internet Explorer will support the "border-radius" CSS attribute?

Let's say you want an even 15px on all four sides:

IE9 will use the default border-radius, so just make sure you include that in all your styles calling a border radius. Then your site will be ready for IE9.

Furthermore: don't forget to declare your IE coding is ie9:

Some lazy developers have <meta http-equiv="X-UA-Compatible" content="IE=7" />. If that tag exists, border-radius will never work in IE.

2021: I recommend using the CSS mask version since the support is pretty good now

You cannot use border-radius with gradient. Here is another idea where you can rely on multiple background and adjust the background-clip:

If you want transparency, you can consider SVG like below:

That you can apply as background:

And the same way as mask where you can get the gradient outside of the SVG:

You can also use it as common element and consider position:absolute to place it around the text:

Here is a different idea with CSS using mask where you will have transparency and it will also be responsive:

With CSS variables, we can make it easy to adjust:

Related question to get a different effect: How do you apply a gradient from outer to inner, only to borders, in CSS?

The above examples cover also the circle shape:

Related question in case you want to apply an animation to the border: Button with transparent background and rotating gradient border

First, you need to understand that the border-radius property takes 2 values. These values are the radii on the X/Y axis of a quarter ellipse defining the shape of the corner.
If only one of the values is set then the second value is equal to the first one. So border-radius: x is equivalent to border-radius:x/x;.

Refering to the W3C specs : CSS Backgrounds and Borders Module Level 3 border-radius property this is what we can read concerning percentage values:

Percentages: Refer to corresponding dimension of the border box.

So border-radius:50%; defines the raddi of the ellipse this way : 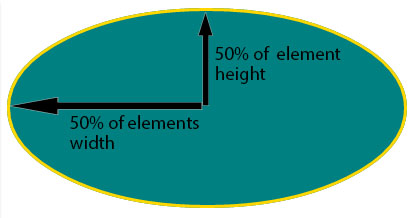 Pixel and other units

Using one value other than a percentage for border radius (em, in, viewport related units, cm...) will always result in an ellipse with the same X/Y radii. In other words, a circle. 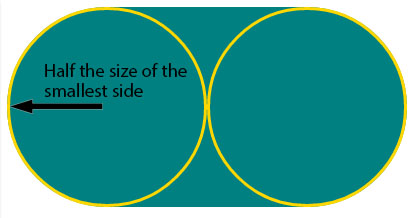 Standard CSS3 rotate should work in IE9, but I believe you need to give it a vendor prefix, like so:

It is possible that it may not work in the beta version; if not, try downloading the current preview version (preview 7), which is a later revision that the beta. I don't have the beta version to test against, so I can't confirm whether it was in that version or not. The final release version is definitely slated to support it.

I can also confirm that the IE-specific filter property has been dropped in IE9.

[Edit]
People have asked for some further documentation. As they say, this is quite limited, but I did find this page: http://css3please.com/ which is useful for testing various CSS3 features in all browsers.

But testing the rotate feature on this page in IE9 preview caused it to crash fairly spectacularly.

However I have done some independant tests using -ms-transform:rotate() in IE9 in my own test pages, and it is working fine. So my conclusion is that the feature is implemented, but has got some bugs, possibly related to setting it dynamically.

Another useful reference point for which features are implemented in which browsers is www.canIuse.com -- see http://caniuse.com/#search=rotation

[EDIT]
Reviving this old answer because I recently found out about a hack called CSS Sandpaper which is relevant to the question and may make things easier.

The hack implements support for the standard CSS transform for for old versions of IE. So now you can add the following to your CSS:

...and have it work in IE 6/7/8, without having to use the filter syntax. (of course it still uses the filter syntax behind the scenes, but this makes it a lot easier to manage because it's using similar syntax to other browsers)

The behavior location should be relative to your HTML file, not your CSS like any other declaration using url(). So assuming your index.html and PIE.htc is in root and your CSS is inside a 'css' folder, you should go like this:

Also, try adding a .htaccess file with the following content in the same location as the PIE.htc file:

answered 4 Months ago
dimi
Only authorized users can answer the question. Please sign in first, or register a free account.
Not the answer you're looking for? Browse other questions tagged :
internet-explorer
css