I have four projects in my Visual Studio solution (everyone targeting .NET 3.5) - for my problem only these two are important:

I added the elmah.dll reference to MyBaseProject in Visual studio 2008 by clicking "Add reference..." ? "Browse" tab ? selecting the "elmah.dll".

The Properties of the Elmah Reference are as follows:

In MyWebProject1 I added the reference to Project MyBaseProject by: "Add reference..." ? "Projects" tab ? selecting the "MyBaseProject". The Properties of this reference are the same except the following members:

If I run the build in Visual Studio the elmah.dll file is copied to my MyWebProject1's bin directory, along with MyBaseProject.dll!

I already made sure that the .csproj of MyBaseProject contains the private element with the value "true" (that should be an alias for "copy local" in Visual Studio):

(The private tag didn't appear in the .csproj's xml by default, although Visual Studio said "copy local" true. I switched "copy local" to false - saved - and set it back to true again - save!)

What is wrong with MSBuild? How do I get the (elmah.dll) reference copied to MyWebProject1's bin?

I do NOT want to add a postbuild copy action to every project's postbuild command! (Imagine I would have many projects depend on MyBaseProject!)

I'm not sure why it is different when building between Visual Studio and MsBuild, but here is what I have found when I've encountered this problem in MsBuild and Visual Studio.

Visual Studio / MSBuild tries to be smart and only bring references over into project Y that it detects as being required by project X; it does this to avoid reference pollution in project Y. The problem is, since project X doesn't actually contain any code that explicitly uses assembly B (e.g. B.SomeFunction()), VS/MSBuild doesn't detect that B is required by X, and thus doesn't copy it over into project Y's bin directory; it only copies the X and A assemblies.

You have two options to solve this problem, both of which will result in assembly B being copied to project Y's bin directory:

Personally I prefer option 2 for a couple reasons.

Here is a sample of the "dummy code" that I typically add when I encounter this situation.

I have finally managed to perform automatically the copy from Project B without having to modify it. IIya was not so far from the solution, but the fact is that I cannot generate statically as the list of files to generate from Project A with MyCustomTask is dynamic. After digging more into Microsoft.Common.targets, I have found that ProjectB will get the list of output from Project A by calling the target GetCopyToOutputDirectoryItems. This target is dependent from AssignTargetPaths which itself is dependent on the target list property AssignTargetPathsDependsOn.

So in order to generate dynamically content and to get this content being copied automatically through standard project dependency, we need to hook Project A at two different places:

All of this was setup like this in ProjectA:

It's based on the project file type. The older Full Framework project file gives you the References area, whereas the newer project files give you the Dependencies area. In other words, as long as it's a .NET Framework 4.7 project, there's nothing you can do about it.

That said, you can simply make it a .NET Standard 2.0 project, which does benefit from the new-style project file. Really, all your class libraries should be targeting .NET Standard, anyways, for greater interoperability.

To see other files in the solution explorer click the "Show All Files" button as shown in the image below. This will allow you to see all the files in your project folder. 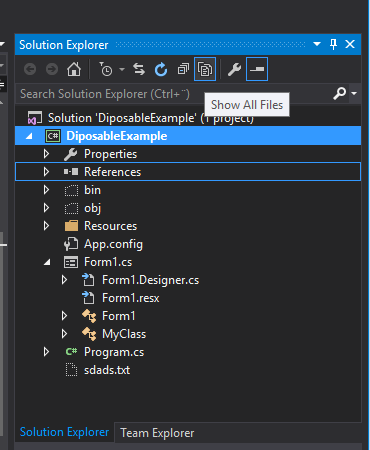 I hope this can help you.

Like John Saunders said, you need to have a master MSBuild file that handles the process.

Here is a sample using MSBuild Community Tasks : GetSolutionProjects that gets the projects for a given solution

answered 3 Months ago
mattbilson
Only authorized users can answer the question. Please sign in first, or register a free account.
Not the answer you're looking for? Browse other questions tagged :
visual-studio
msbuild
reference
dependencies
project